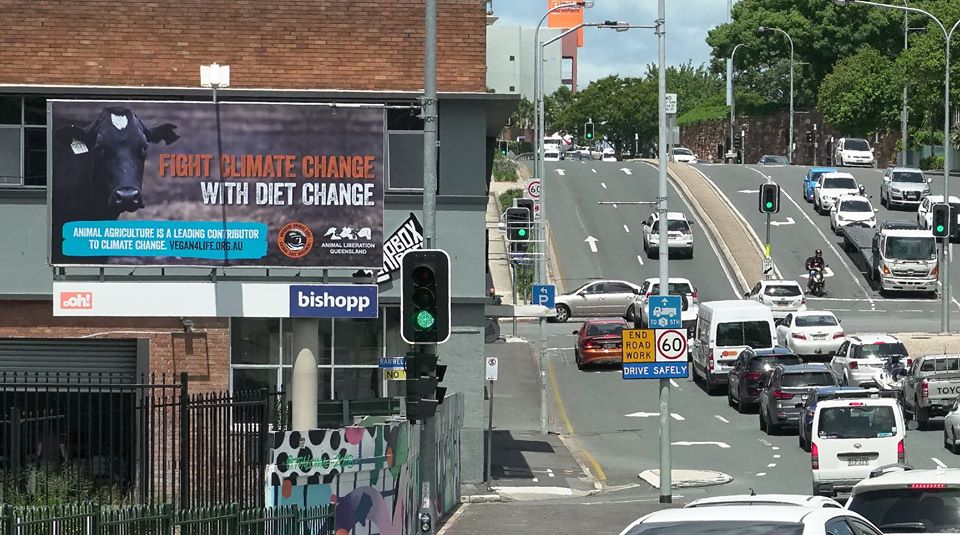 Can you sacrifice your diet for climate change? Lifestyle changes may not be enough to save the planet, but for every person going vegan each month, that’s equivalent to 30 animals not eaten, 126,739 liters of water saved, and 913 square feet of forest conserved.

These numbers came from Animal Liberation Queensland which recently launched a new billboard campaign urging Queenslanders to “fight climate change with diet change.” This campaign, done with the support of Brisbane Animal Save, has gone up in various Brisbane suburbs since February 2020 and will be up until this April.

It’s the highlight of Vegan4Life, an initiative of Brisbane Animal Save & Animal Liberation Queensland. The group believes it’s the single biggest way that individuals can reduce their impact on the planet.

To keep the billboard up for another three months, the organisation encourages the public to chip in via a crowdfunding platform. As of March, the campaign raised $6,204, almost reaching its $6,500 target. If the target exceeded, Animal Liberation Queensland will use the funds to invest in more billboards and other advertising opportunities.

“Our campaign aims at highlighting the detrimental impact that animal agriculture is having on our environment. We are already seeing the devastating effects of climate change in Australia – drought, bush fires & floods! There’s never been a more important time to push for massive change, and the single biggest way an individual can reduce their impact on the planet is by going vegan,” the group wrote via Chuffed.org.

The animal rights organisation also sends a free veg kit for people interested in going vegan but don’t know where to start.To get yours and to help spread the word, visit vegan4life.org.au or check out Animal Liberation Queensland’s website.