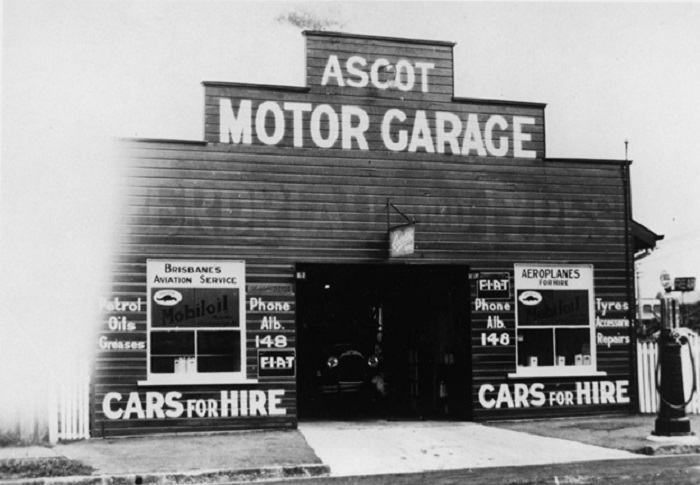 Whilst real estate prices in Ascot and Hamilton are amongst the highest in Brisbane, most residents don’t know about the diverse and fascinating history of the area. For example the connection of Ascot’s name to the racecourse, the 154-year history of the Hamilton Hotel, the chaos of keeping the Eagle Farm Women’s Prisoners away from the men, the role of Brett’s Wharf in WW2, local resident Sir Charles Kingsford-Smith, the evolution of Racecourse Road and many other fascinating evolutions.

The Ascot and Hamilton Heritage Trail is a 3.5-km walk, including 18 points of interest that help illustrate the development of both Ascot and Hamilton. The trail starts off just outside the Hamilton Hotel and ends at the entrance to the Eagle Farm Racecourse.

Visitors who want to learn more about the stories and events that shaped the history of the area can check out Brisbane City Council’s Gallivant Through Ascot and Hamilton Heritage Trail brochure. The document also includes more information on the location of public transport and access for people with limited mobility. Take note that some sections of the heritage trail are steep and may be difficult for some visitors to access.

The evolution of Ascot officially started after the establishment of the famous racecourse in 1865 by the Queensland Turf Club. The development made the area more attractive and further helped to define its distinctive character. The land was granted to the club by the Colonial Government in 1863. Subsequently, the first race meeting was held two years later.

The name ‘Ascot’ used to be a reference to the famous English racecourse. As more people visited the racecourse, Ascot became more closely associated with this part of Brisbane. The rail line was then extended from Eagle Junction to Racecourse Station in 1882 and the station later adopted the name Ascot in 1897.

Gustavus Hamilton established the hotel in 1865 and named it The Hamilton. The hotel then became a reference point in the district. Not long after, the area around the hotel adopted the name The Hamilton.

At first, female convicts were held in the Female Factory, on the site which is now occupied by the General Post Office on Queen Street.

The factory was surrounded by high stone walls to limit fraternisation with men, but this proved to be ineffective. Authorities then decided to move the female convicts to Eagle Farm, away from the attention of male convicts as well as soldiers, who were forbidden from crossing Breakfast Creek.

The site of the Eagle Farm Women’s Prison was only accessible through the convict-hewn track which is now known as the Kingsford Smith Drive. The women’s prison may no longer be standing today, but it is an important archaeological site located about two kilometres away from Schneider Road.

Did you know that Hamilton, Ascot, and Eagle Farm experienced some of the most intense war-time activity seen in Australia during World War II?

Following the Japanese attack on Pearl Harbour on 7 December 1941, US forces were redirected to Australia. Brett’s Wharf played an important role as the receiving dock for the US Air Force’s unassembled aircraft.

Built at a time when electric trams travelled to Hamilton, Substation No. 12 is one of only two substations built in Brisbane that combined the substation functions for both the electricity supply and the tramway system.

The Hamilton substation was the first of this type of installation to be built in Brisbane in 1947. Meanwhile, the other Substation No. 42 on Waterworks Road at Ashgrove, was built in 1948. Such a dual facility was an unusual but efficient use of a site, as it incorporated both types of substations within a single building.

By the 1960s, the Council viewed trams as an inefficient, expensive, and inflexible form of public transport. This lead to the decision to discontinue the service across Brisbane in 1969.

In 1953, this road was renamed Kingsford Smith Drive in honour of one of Australia’s most important aviators. Sir Charles Kingsford-Smith was born in a house near the corner of Riverview Terrace and Hamilton Road.

This structure was built in 1920 as the Hamilton Town Hall and Hamilton Town Council Chambers.Brisbane architect, MT Stanley designed the hall which became the venue for Council business community meetings and social occasions like dances.

After its use as a community hall ended, residents petitioned for it to become the site of a School of the Arts, a move that did quite succeed. Today, it is the site of a public library.

Opened in 1907, the Tivoli Gardens was a popular, open-air  Vaudeville theatre in Brisbane and is famous for its Vaudevillian acts. Miss Bella Sutherland, a famous performer on the vaudevillian circuit both in Australia and internationally, established the theatre.

The 1,000-seat, canvas theatre served theatre enthusiasts for eight years. Times changed and with the advent of cinema, the Tivoli Gardens Theatre was converted for use for cinema screenings until it finally closed in 1921.

The brick church was completed in 1920 as St Augustine’s Thank-offering and War Memorial Church.

Queensland artist, William Bustard designed the artistic church windows.He was popular for his work with stained glass. Examples of his works in Brisbane can be seen in St John’s Anglican Cathedral, St Stephen’s Catholic Cathedral, and Brisbane City Hall. The set of windows in St Augustine’s are considered to be the only remaining complete set of Bustard’s windows.

Racecourse Road was the direct path from the river to the racecourse.

In the late 1800s, only a few houses dotted between the river and the racecourse. These include residences to two sharebrokers, a cabinet maker, and two horse trainers.

In the early 20th Century, the Racecourse Road quickly evolved into a busy street, lined with more houses, shops, and businesses, with electric trams running back and forth.

Lynford is considered as one of the finest examples of Tudor Revival homes in Brisbane. The stately, heritage-listed residence on Windermere Road is made of brick, stonework, stucco, and timber with a distinctive gabled roofline.

It was designed and built in 1928 by notable architect E.P Trewern. It has been subsequently renovated by Brisbane-based architect Richard Groves to accommodate modern inclusions.

The grand residence was built around 1886 for a politician named J.G. Appel. Prominent architect, Richard Gailey designed the Windermere house.

Built in 1938, this exceptional example of Functionalist architecture is reminiscent of the glamorous 1930s Hollywood parties. The American-educated Douglas Roberts designed the house, whose simple, geometric style was a far cry from the traditional “timber and tin” residences in vogue at the time.

In what was considered “ultra-modern” at the time, the house had an all-electric kitchen, which was designed in a utilitarian, minimalist manner. Remarkably, it also had an electric dumb-waiter which enabled meals to be delivered to the breakfast room upstairs.

A sizeable air raid shelter was even built in the yard to protect the family from World War II bombing runs.

The original owners left Chateau Nou in the 1960s but it remains a private residence to this day.

Nyrambla epitomises the development of Ascot in the late 1800s when grand residences were built on the apex of the suburb’s hills. The 2-storey residence was designed in 1885 by James Cowlishaw, an early Brisbane architect.

Owned by bank manager Henry P Abbott, Nyrambla was originally built on 15 acres of land before portions of it were divided off to make up surrounding streets, two of which have been named Henry and Abbott in commemoration. Today, Nyrambla is a private residence.

Built in the 1890s, this house was used as accommodations for horse trainers and their families. Before the house was built, it was originally the site of the Tattersalls Stables, which was leased to trainers of prizewinning horses because of its close proximity to the Eagle Farm Racecourse.

At the turn of the 20th century, the house changed hands and became FitzGrafton Lodge, owned by James McGill a respected horse breeder and grazier, who bequeathed it to his son upon his death. McGill Avenue, a road adjacent to the racecourse, was named after this family.

Most of the housing stock in Brisbane in the late 19th Century consists of timber. As more houses emerged in the developing area, the locality needed a permanent fire station that services Ascot and Hamilton. The Hamilton Fire Station was then built in 1920.

Originally called Racecourse Station, the line from Eagle Junction to Ascot Station was opened in 1882. The extension of the line provided race-goers with an efficient way to get to and from the races as the trains exclusively run for race days.

As mentioned earlier, Ascot has been extremely active during World War II. In fact, Eagle Farm Racecourse became the first US camp established in Australia.