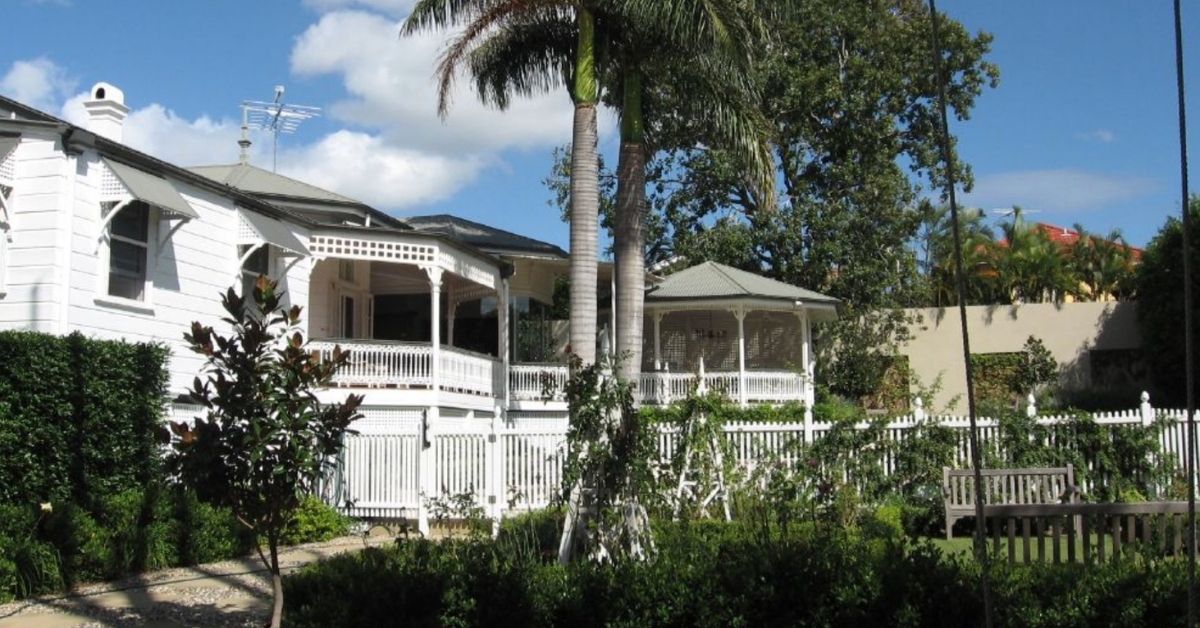 Windermere is one of Australia’s most beautiful heritage homes. Built in the 19th century by Ruth Sutherland and her husband, it is one of only 15 beautiful, blue-chip homes on the eponymously named Sutherland Avenue in Ascot.

Windermere was built for solicitor John George Appel and his wife, Ruth Sutherland in 1886. Ms Sutherland was the daughter of pastoralist James Sutherland who owned many acres of land in the city.

During their marriage, Mr Appel worked as a solicitor for 10 years before he became a pastoralist and then eventually joined politics as a member of the Hamilton Shire council from 1890 to 1908. Mr Appel also became the mayor of the municipality two times.

Windermere was built as a single-storey chamfer board home with corrugated iron roofs. The house is set at the back of the Sutherland Ave lot, looking over to the gardens, the tennis court, and its mature trees.

It is believed that Windermere was not the original property on the land and that the Sutherland patriarch had the first house demolished so he could give this beautiful home to his daughter.

Richard Gailey was touted as the architect and designer of the house. Its wide verandahs and large, symmetrical bay windows have been kept intact through the years.

The entire property is 4,700 square metres. Currently, is a six-bedroom four-bath home with a secure, triple-car garage, a professional-grade kitchen, two courtyards, and a guest wing with its own kitchen.

Located in one of the most prominent locations in Brisbane, it’s not surprising that the list of Windermere’s previous occupants read like a Who’s Who of Brisbane society.

When the family moved to Nerang, Mr Appel pursued farming whilst still working as a public servant. Windermere was turned over for renting by Charles Frederick White until 1918.

By 1923, George Kermode Jeffrey had bought the property, remodelled the eastern verandah, and demolished the kitchen and servants’ quarters.

After the Jeffreys, Windmere became the property of Dr Ellis Murphy, who was originally from Randwick in NSW and moved to Brisbane in the 1920s. The doctor worked at Mater Public Hospital, Brisbane General Hospital, the Greenslopes Repatriation Hospital, and the Kenmore Sanatorium. He was also a part-time professor at the University of Queensland.

The Murphys became the longest residents of Windemere to date, calling this beautiful house their home from 1928 to 1967. Dr Murphy was knighted for his service in medicine in the 1960s.

After the Murphys, Barbara and Trevor Cottee lived in the property until 1984, when it was bought by Robert Geoffrey Bentley. Two years later, Peter Maloney would buy the house and conduct substantial modifications and home improvements, including the addition of a new bathroom and study on the north side and the removal of the bathroom and laundry at the back of the house.

The years between the 1990s and 2014 saw Windmere change hands a number of times. Chris Miers bought the house from pub baron Andrew Griffiths in 2014 for $10.2 million, a record-breaker for Brisbane at the time. The Miers family has since moved to Teneriffe.

In spectacular fashion, Windermere’s most recent changing of hands was in 2020, when its sale fetched another suburb record of $13 million after just three weeks on market.

Sutherland Ave is a tightly-held market with 15 beautiful homes. More than half of the owner-occupiers of this street have lived in their impeccably kept houses for an average of 11 years. Only a quarter of homeowners in Sutherland Ave have stayed there for less than three years.

Other houses on this street are owned by an award-winning fashion designer, a real estate mogul, and an aviation CEO. Sutherland Ave’s other drawcard is its proximity to Ascot State School.